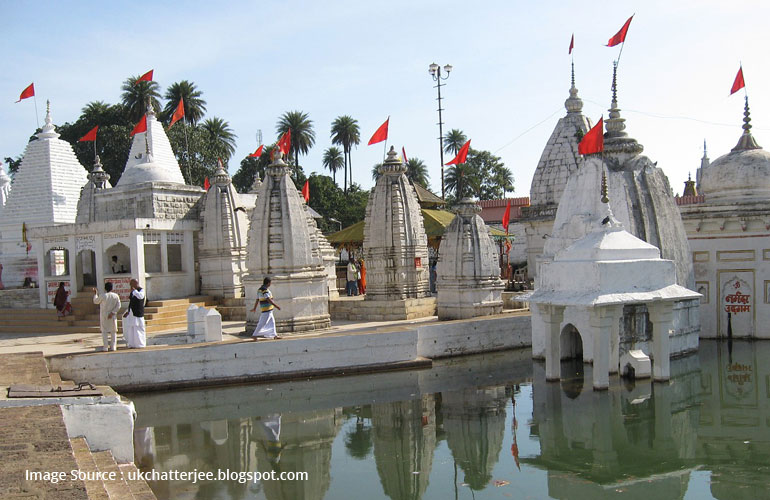 Situated at a height of approximately  1,000 m in the green and forested Maikal Hills in northwestern Chhattisgarh, Amarkantak is considered to be teerthraj or the king of pilgrimages. The small town is crowded with temples, shrines, pilgrims, ash-smeared sadhus as well as tourists.

The Narmada and the Sone, two of the most venerated rivers of India, arise in the holy town of Amarkantak. The Narmada flows westwards while the Sone flows to the east. An endearing legend recounts how once Sone and Narmada were to be wed, but Sone repulsed Narmada and married another. The distraught Narmada changed course from east to west and vowed to remain a virgin!

The holiest place in Amarkantak is Narmada Udgam, a small kund with a small shrine dedicated to the river goddess. Pilgrims throng the shrine to offer their prayers to Maa Narmada.

There is a group of about 20 temples surrounding the kund. Facing Narmada Udgam is the Mata Narmada Temple, a shaktipecth. It is believed that Sati’s right buttock fell here, when Vishnu cut Sati’s body into pieces while trying to stop Shiva’s tandava nritya (see p 58). The garbhagriha of the temple enshrines a black basalt idol of the river goddess, mounted on a lotus, dressed in a brocade saree and wearing a silver crown. Describing the idol, Royina Grewal in an article ‘Narmadey Har’ writes ‘In her four arms, she holds a chaplet signifying prayer, a water jar, a lotus which represents purity, and a linga which establishes her devotion to Shiva.’

South of the Narmadakund, outside the complex of white-washed temples, are a group of ancient temples built by the Kalachuri king, Karnadeva (1042-1072). This includes Machhendranath, Pataleshwar and Kama Math, with beautifully carved shikharas. There is also an 18th century temple, the Keshav Narayan Temple, which was built by the Bhonsle ruler of Nagpur.

Around a kilometre from Narmadakund is Mai ki Bagiya, a grove of mango and banana trees, where goddess Narmada is said to have come to pluck fruits.

Sone river originates at Son Bacharwar, a village in Bilaspur district near Pendra. Situated at a distance of 1.5 kms from Narmadakund is Sonmuda, also believed to be the source of the river. The Greek historian Megasthenes mentioned the Sone river in his travel accounts, and said that its name was derived from the gold dust found in its water.

About 5 kms from Narmadakund, Kabir Chabutra is one of the popular places in Chhattisgarh, where the great poet Kabir (15th century) is said to have achieved salvation.

Six kilometres northwest of Narmadakund is the Kapildhara Falls. The waterfall is named after a rishi whose meditations here made the surroundings sacred. One of the highest waterfalls fed by the Narmada, Kapildhara marks the union of the three mighty ranges of central India, Satpura, Vindhya and Maikal.

It is said that when Lord Shiva destroyed Tripura (the three cities of the asuras) by fire, some of the ashes accidentally spilt over at Amarkantak, which led to the birth of crores of shivalingas. The Puranas referred to this region as Maha Rudra Meru though now only one shivalinga is visible at the old Jwaleshwar Temple, which is situated 8 kms from Amarkantak.