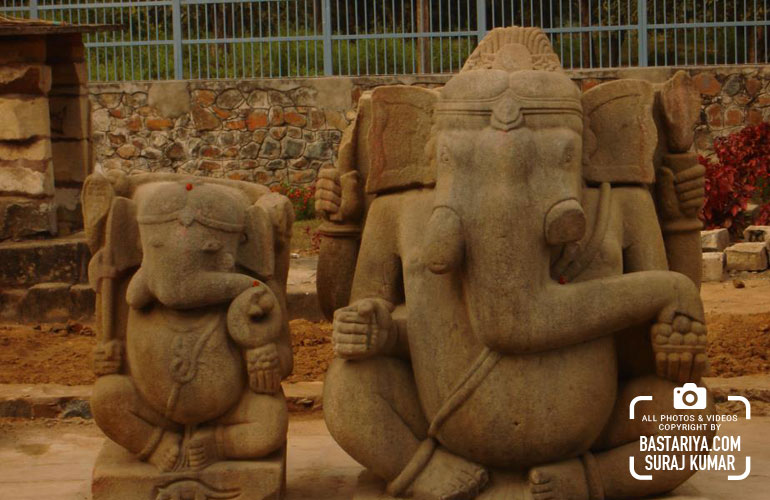 Barasur is situated in the bank of River Indrāvati and is also known the city of temples and ponds. The city is named after the king called Banasur whereas some believe that the city was earlier known as Balsurya. It is also known as “Barasur Garh” as the remnants of the fort is found in the Indrāvati River. This place was the throne of power during the tenure of Gangavanshi rulers from Odisha as early as 840 AD. But unfortunately, the Nagvanshi rulers captured the power from the Gangavanshi ruler and made Barasur as the capital. Nagvanshi ruler transferred the capital from Barasur to Taralpal and the city lost its glory. The place is believed to have 147 temples and equal number of ponds. The ruins of the temples are still a visiting glory for the tourists. With the help of Barasur Mahosatv held by the tourism of Chhattisgarh, the place is reviving its glory.

The Barasur temple was built by King Anam Dev. It is believed that when the king came to Bastar, he built the temple of family deity Goddess Danteswari and in the due course of time the temple was slowly shifted to Dantewada.

The place was named after the King Banasur who was a great devotee of Lord Shiva. Usha, the daughter of Banasur and Chitralekha the minister’s daughter were great devotees of Lord Ganesh. As there were no Ganesh temple nearby, thus they requested the King to construct one and hence there are twin Ganesh statues in Barasur. Lord Ganesh was very pleased with their worship as they used to visit and pray to him regularly.

Although the temple is dilapidated and is being reconstructed, there are two large sand stones statues of Lord Ganesh. One is 7.5 feet and the other is 5.5 feet. It is the 3rd largest Ganesh statue of the world with a Shiv Lingam which is found during the excavation process.

It is a 50 feet high temple and an archaeological importance in Barasur. The temple was built during the Gangavanshi Kings around 11th century. His nephew was a great lover of arts and architecture and hence is believed that the temple has been constructed by the Bhanja with perfection in the architecture with his expertise. Out of jealousy the King wanted his name to be associated with the temple. Not agreeable with the King, the Bhanjaa killed the King and out of guilt placed an image of the King at the temple. After the natural death of the Bhanjaa, his image was also installed at the temple; hence the temple is named as Mama Bhanjaa Temple due to the installation of two images of both the King and his nephew.

The temple is situated on the bank of a pond with low rising hills nearby. It is dedicated to Lord Shiva and believed to be built by Chandraditya, a feudal chief under Nagvanshi King, Jagdev Bhusan. He excavated the tank and built a Shiva temple. The plan of the Garvagriha is like 5 chariots and is attached with a square pillared mandap in front. The Pancharaths are like 5 senses of a human being and one has to conquer the same. The exterior walls contains images of Brahma, incarnation of Vishnu, Prajapati Dakshya, Uma Maheswar and some other couples.

The temple is in a courtyard with 32 pillars and couple of Shiva Lingams. It is still flooded by the locals for visit. Twin temples of Garbhagrihas are on a huge platform with miniature shrines. A beautifully sculpted Nandi sits outside the Garbhagriha. The temple was constructed in 1030 AD by the Queen of Nagvanshi ruler, Someswar Dev. Due to the usage of 32 pillars it is known as Battisha Mandir.

The temple is an example of mixed style architecture in Central India. It is 7kms on the Barasur-Geedam road. In ancient times it was believed that a couple might not have a child due to the ‘Sharpa Dosh’. The couple has to install the statue of snakes in a temple and beneath a pipal tree after which the couple might be blessed with a child.

It is ona hill 2kms from Barasur. The god is known as the protector of the Barasur town. The deity is installed on the floor, outside the temple and below the cave.

It is in the Dodarpal village, 30kms in Geedam road and near Mawali Bhata. Some people in the area believe that Maa Danteswari was installed here first before shifting to Dantewada.