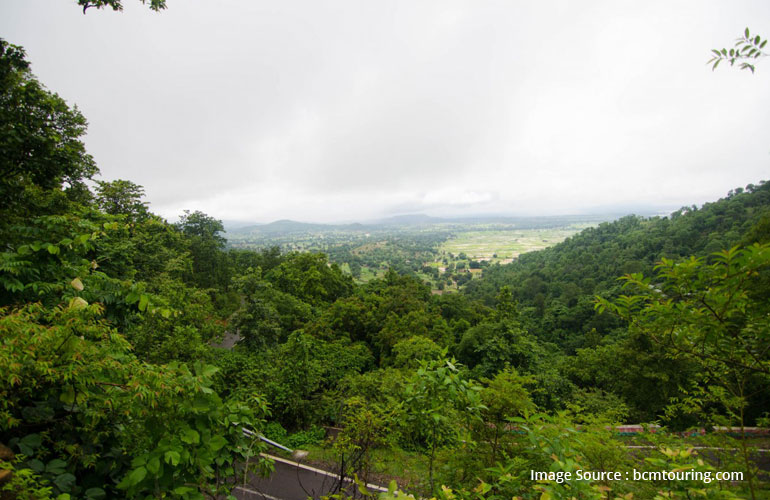 A forested retreat replete with plateaus, grassy knolls. waterfalls and gentle undulations fading into the horizon, this ‘hill station’ in Surguja district is the state’s best-kept secret. Roughly 55km from Ambikapur, Mainpat is also home to the Dagpo Monastery revered by a sizeable Tibetan populace that has lived here since the 1960s.

One of the best stretches of tarmac in the state brings you from Ambikapur to Mainpat under an hour and half via Darima. (The lengthier route via Sitapur is avoidable especially if you are planning a day excursion). The drive complements the destination – meandering gently uphill, allowing sal tree-framed glimpses of broad valleys and chessboard yields in its wake. Flattening out again atop the Mainpat plateau, it slices through and past bauxite- rimmed potato and paddy fields. Heaving slopes reminiscent of the English countryside as far as the eye can see reveal scenes of unhurried rural serenity: swaying bullock-carts, freshly ploughed fields, resting farmhands, tree groves. Clusters (or camps as they are called) of Tibetan settlements cap surrounding highlands, their distinctive prayer flags all a-flutter. Time stands still at Mainpat. begging for nothing more than lethargic strolls and languorous picnics as you soak in its quietude.

So called as it was once the domain of the eponymous Big Cat that sauntered here from adjoining jungles to quench its thirst. Six kilometres past Camp Number a path cuts left into a sal thicket to bring you to a rocky river cascade that drops over 30m to form a noisy waterfall. It is best viewed from the point where it smashes onto massive boulders before making a disappearance into the thick foliage downstream.
A flight of nearly a 100 steps (hidden from sight) to the left of the viewpoint take you down to its base. Note that the steps are pretty steep. Approach them carefully as they tend to be moist and slippery; not advisable for seniors, children or anyone with joint troubles. Other falls in Mainpat are less accessible due to indifferent roads, while some need considerable hiking to reach (see box).

This monastery is named after the district in southern Tibet where Dratsang, a monastic community of the Gelugpa school took shape in the 15th century. Post the Chinese aggression a number of monks of this order settled in Bomdila on arrival in India. In the late 70s, the Dalai Lama offered them the use of the monastery at Mainpat; where they have remained since. Neat rows of houses reminiscent of their trans-Himalayan homes line flag-strung streets en route to the monastery at Camp No.1. Located beside the Central Tibetan School, its smallish multi-hued edifice provides succour to nearly 2000 Tibetan residents.