Cynosure of all Eyes – Bhoramdeo Temple 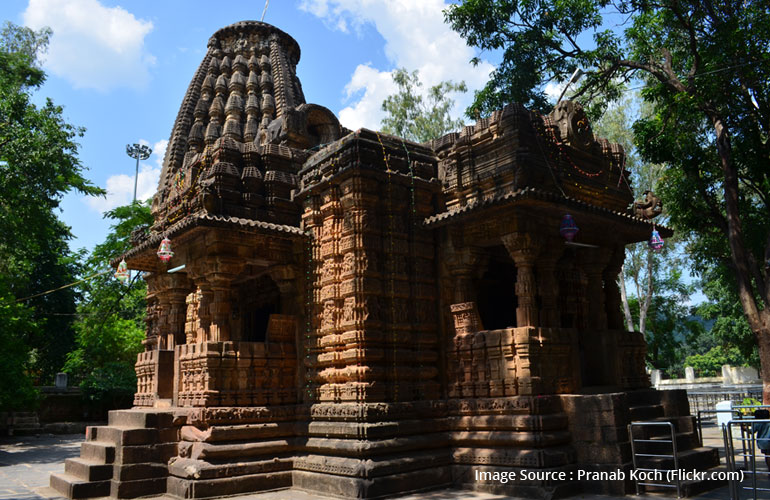 The stunning 10th-century  Bhoramdeo Temple is 130km from the state capital, Raipur, Untouched and pristine, the setting of the temple is spectacular. Bhoramdeo Temple is nestled in scenic surroundings, barely kilometre from the Bhoramdeo wildlife sanctuary. It stands in the serene shade os sai and beeja trees, with the rolling maikal hills forming a stunning backdrop. Located away from the regular tourist destinations, the temple has managed to retain its ethereal charm. This relatively unknown gem of Indian art, is a sculptural marvel with exquisite carvings of deities and human figures.

This Shiva temple is the cynosure of all eyes, especially during the annual state-organised Bhoramdeo Mahotsav, held in the last week of March or First week of April, People from all over the country throng the village to be a part of the celebrations.

Bhoramdeo Temple, dated to 7th-11th  centuries is said to have got its name from a Gond king called Bhoramdeo, who, according to the local lore, had built this tumph., !,, there is a statue in the garbhagriha that is believed to be of king Bhoramdeo, though there is no historical evidence to prove this. Indeed Gond rule in this region came much later, in the 15th century, some four centuries after the completion of the Bhoramdeo Temple. Hence it seems more likely that the builder of this temple belonged to one of the preceding dynasties — either the Kalachuris or the Phani Nagavanshis.

It is believed that the temple derives its name from Lord Shiva; in the local dialect, Bhoramdeo is another name for Shiva. The primary image in the garbhagriha or the sanctum sanctorum is that of a shivalinga.

The temple was restored by king Dharam Raj Singh of Kawardha in 1928-29. Even today, dusk and dawn, colourfully dressed villagers can be seen walking down the embankment of the sarovar towards the temple. Like most Hindu temples, the Bhoramdeo Temple faces east, so the first rays of the rising sun light up the deity enshrined in the sanctum. However, owing to the trees surrounding the temple, light filters through the branches and falls in patches on the exterior walls of the sandstone structure, giving it a magical, kaleidoscopic appearance.

The architecture of this temple is a perfect example of the north Indian nagara style. Constructed on a 1.5-m high adhisthana (platform), it consists of a mandapa (assembly hall) and a garbhagriha (sanctum sanctorum) joined by an antarala (vestibule). There are three pravesh-dwaras (entrances), on the northern, southern and eastern sides. The entire temple structure measures 18 m in length, 12 m in width, and rises to an imposing height of 30 m.

The jangha (or outer wall of a temple, extending from the base of the shikhara to the top of the platform) comprises of four rows of sculptures and several mouldings, with geometric and foliage patterns. The topmost row of sculptures, located right at the base of the shikhara is composed of a series of bharabahakas, who have been depicted as dwarves (vamana) holding up the shikhara. So immaculate is their rendering that the exhaustion of lifting such a huge load is visible in these  figures  through their bulging eyes, arched backs and breathless look on their faces

The richly decorated jangha is further embellished with three vertical niches carved in the centre, on all three walls. A sculpted deity-Ganesha, Hanuman, Shiva -is enshrined in each of these niches. Unlike the rest of the temple these sculptures were carved independently, either of granite or schist stone, and then placed in the niches.

One of the most recurrent and perhaps significant motifs carved both inside and on the outer walls of the temple is the kirtimukha, a decorative motif often showing the grinning face of a lion. They are carved to ward off evil. The shikara of the temple is an accumulation of ascending angashikaras (smaller replicas of the shikara), which give it a lofty appearance. It is divided into seven levels, each made up of a several angashikaras.

The temple structure sits on a 1.5-m high adhisthana (platform) that is richly ornamented with five sakhas or horizontal bands of mouldings. The series of ornamental moldings provide a fine relief for light and shade