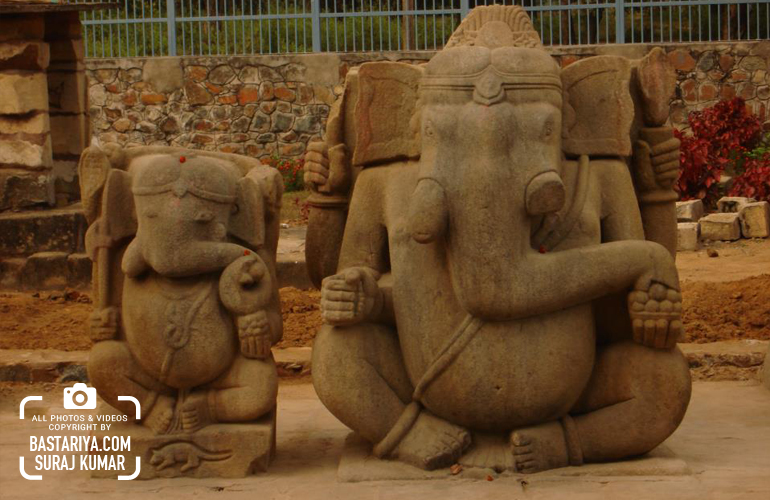 One of the regions best known archeological sites, there is no unanimity among scholars as the early history of Barsur. Some claim that it was the capital of the Gangavashi rules as early as 840AD. Others argue that it was built by the Nagavanshis, who ruled much of this land for about three centuries before being displaced by the Kakatiyas, in the 10th-11th century AD.

Barsur is believed to have had almost 150 temples in its heyday. One of these is the 11th- century Chandradtiya Temple believed to have been built by and named after a feudatory chief called Chandraditya. Among the many Barsur – style sculptures found here is the impressive Hari-Hara, a composite image of Vishnu and Shiva, on the door of the garbhagriha. Within is a damaged idol still identifiable as Mahishashura Mardini, locally called Dhantaswari, sculptures depicting sacrifices are filled into  the recess of the temple The temple compound has seated Nandi near the door

Another Shiva temple just walking distance from Chandraditya temple is distinguished by its mandapa which has 32 pillars arranged in four rows It is popularly called as Battisha temple (Battis in Hindi/Chhattisgarhi means 32) it is interesting here to note that all the 32 pillars used in temple(each over 2m in height ) are monolithic. Built on a square platform 8-m wide and meter high this temple is unique due to the presence of two identical garbhagrihas that share a single mammoth Nandi.

Mama Bhanji ka Mandir is in a better state of preservation than the other two temples. It is built on a raised moulded base with a well-preserved curvilnear shikhara. A 1th-century Telugu inscription on its platform helps date the temple.

A Ganesh Temple may also have once existed nearby, but today only ruins of the building remain. Fortunately, two great sculptures of the deity have survived the larger one being almost 2.5-m high over and 5 m in circumference.

The classical Barsur-style of sculpture is characterised by a short neck and a square and plain face, rounded limb, low forehead, flat hair, and cap. Even the carving of cloth suggests that in real life it must have been made of cotton, unlike the fine muslin or silk, respected in medieval sculpture in classical temples of this period Michel postel and Zarine cooper, Bastar Folk Art: shrines figurines and memorials (1999).