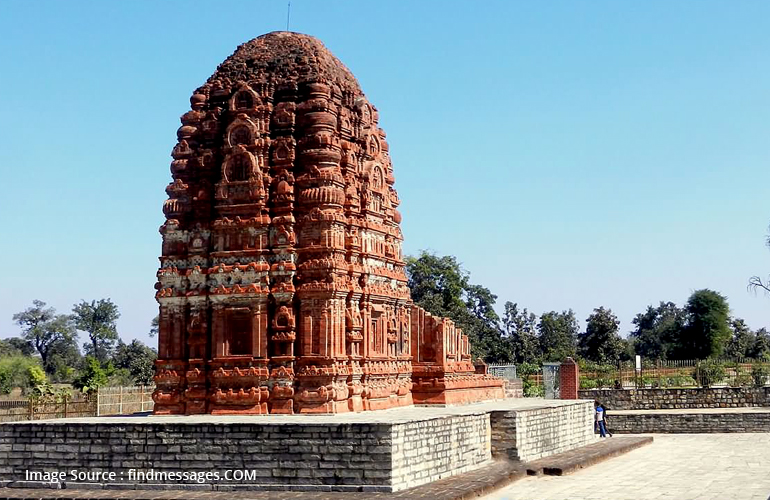 Sirpur or shripura, as it was known in ancient times, is a small village drained by river Mahanandi, Presently Located in Mahasamund district. The capital of the Kingdom of Dakshin Koshala under the Sarabhapuriyas and Panduvanshis, it has archaeological remains associated with Shaiva, Vaishnava, Buddhist and Jain faiths. The Chinese traveler, Hiuen Tsang, Visited Sirpur in 635AD. Excavations at Sirpur have yielded ruins a numerous Hindu temples and Buddhist monasteries (viharas), the most notable are the Lakshman temple, Gandheshwar Temple, Anand Prabhu Kutir Vihara, and Swastika Vihara.

One of the finest works of brick architecture, Lakshman Temple can be assigned to the 7th century, to the mature phase of Gupta architecture. Dating c 625-650, a large inscription recovered from the debris of the mandapa (now preserved in the Raipur Museum), records that a Vishnu Temple was built here by Vasata, the window of the Somavanshi King, Harsha Guptha during the reign of their son Mahashivagupta Balarjuna(c 595-655 BC).

‘That the temple was dedicated to Vishnu is Known from the doorway figures as also the foundation inscription which states that the Vishnu temple was built during the reign of Mahashivagupta Balarjuna by his widowed mother Vasata, who was the daughter of King Suryavarman of the royal family of Magadha. The foundation inscription is palaeographically assignable to c625- 650 AD (Krishna Deva, Temples of India).

There are different theories as to how the temple acquired its present name. The most popular one holds that among the various sculptures found during the excavation, one was of a small black statue of Lakshaman found seated on Shedhnag (the five-hooded snake that is Vishnu’s vahana). According to another, in earlier times, the temples situated close by were named in Paris, and with a Ram Temple in the Vicinity, this temple was, in all probability, dedicated to Lakshman.

The Lakshman temple sits on a high platform about 23.5-m long, 12-m broad and 2.1 m high. The two entrances with a curvilinear shikhara of four stories are marked by imposing chaitya arches in the central ratha and stupendous amalkas in the corner rathas The walls of the Sanctum and the mandapa are decorated with niches framed by pilasters. The mandapa had eight pillars arranged in two rows with corresponding pilasters on the side walls.

Only the lower portions of these pillars stand today, with their bones indicating that the floor of the mandapa was higher than that of the Sanctum, is also lost to antiquity. There is a, however , a beautifully carved doorframe at the entrance of the sanctum, embellished with Sculptures and a carved lintel displaying a large image of Vishnu reclining on the serpent.

On the other side of the door jambs, there appear images of Vishnu’s incarnations. The sides of the door jambs contain human figures in Paris. The inner mouldings of the door frame also bear rich sculptural decorations that are conventional in style.

Of special interest are the three false windows, mithya dwar or Kuta dwar, at the back and the side walls (west, north and south side) of the temple Imitating woodwork, the mithya dwars are enriched with beautiful floral and geometric patterns, all done in the difficult medium of brick. Belief has it that a temple has four doors, signifying yoga(practice), Karma(action), gyan(Knowledge) and Bhakti (devotion), of which bhakti is open to all hence the open door on the eastern side.