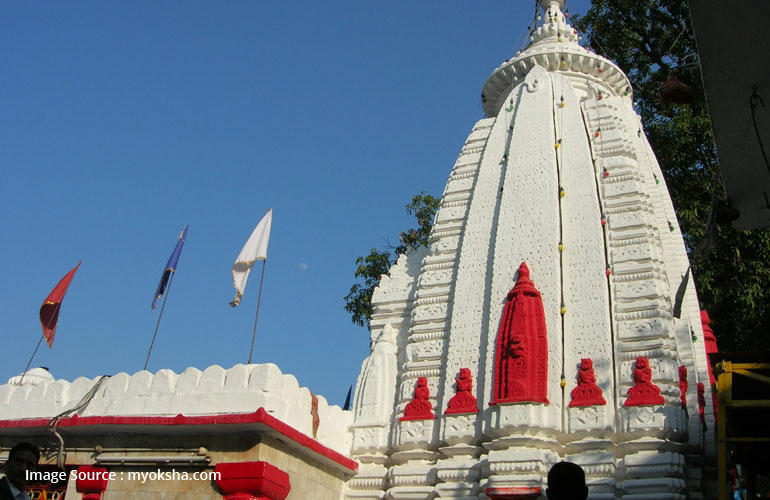 In 1045 AD, Ratandeva I constructed the Beautiful Mahamaya Temple at the site of his ethereal vision. Built in the northern Indian Nagara style, the temple is surrounded by a 46-cm thick wall. The present temple is a recent construction probably on the site of an ancient temple. The mandapa is supported on Sixteen pillars. There are two statues in the garbhagriha, one is of Mahamaya in the form of mahishasuramardini and one of Saraswati. The entire temple complex presents a spectacular sight during Navaratri, when thousands of devotees congregate here and light lamps. It is believed that Ma Mahamaya fulfills all the wishes of her devotes during the festive season. Mahamaya Temple is said to be shaktipeeth.

One of the more popular legends associated with Devi worship is that of King Daksha and his powerful son in law, Shiva. Once Daksha had a yagna in his palace and invited all the kings and the gods except Shiva. Utterly humiliated by this insult to her husband, sati, Daksha’s daughter, plunged into the Sacrificial fire.

Shattered by the death, Shiva held her charred body and started the tandava nirtya, the dance of destruction. Durga Bhagwati says that Vishnu in an effort to save the world from destruction. cut Sati’s dead body with his divine weapon, the Sudarshan chakra. pieces of the body were flung far and wide and each of these sites were charged with primordial energy and came to be known as the shaktipeeths. There are 51 shaktipeeths in all, Ratanpur being one of them, as Sati’s shoulder is said to have fallen here