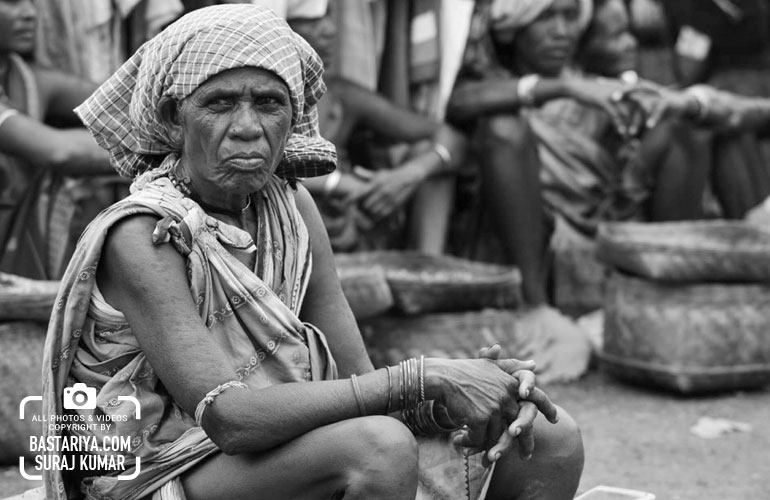 Etymologically, the word Mur is a Sanskrit word. It means mool, which is the root the beginning etc. Therefore, it denotes the first inhabitant, (moolnivashi). Because of this understanding, the word Muria was used to identify, all the inhabitants of Bastar.

The Murias are neat, industrious, and good cultivators who constitute the major block of the tribal population in Bastar. They are more advanced, broad minded and live in the open, amidst the vast rolling plains and valleys.

The Muria economy is agrarian and they cultivate rice in plenty. Some Muria tribes are also depended upon collecting forest products and edible parts are consumed by the poverty ridden tribals. In case of sickness and maladies, they seek the remedial powers of the Mahua plant. They prefer intoxicating with traditional Mahua drinks, rather than using medicine for curing ailments.

The Muria society is devoid of caste system. They practice magic and wizardry and believe in worshipping the cult Gods and Goddesses. Their society is quite progressive.

Divorce and remarriages are common but adultery is prohibited.

The Concluding programme of famous Bastar Dussehra was known as Muria Darbar. It denotes the gathering of all inhabitants of Bastar. Later making distinction with Muria tribe, the Muria Darbar was Substituted with the name of Adivasi Darbar. There are three categories of Murias: Raj Muria, Ghotul Muria, and Jhoria Muria. Raj Murias are found in Jagdalpur. Ghotul Muria and Jhoria Murias are absorbed with Ghotul murias. Though the name Ghotul maria is prevalent, the institution of ghotul is almost faded away from Bastar. The Ghotul of Murias, the village dormitory, the bachelor’s hall is peculiar to the Murias of Bastar. It is meant for the young unmarried members of both sexes. Ghotul is an autonomous body of youth for better life, organizing work groups to serve the villagers on different occasions, which demand collective effort, are other function of Ghotuls. Here, teenagers of both the sexes live and undergo a transition to adulthood under the supervision of the elders.