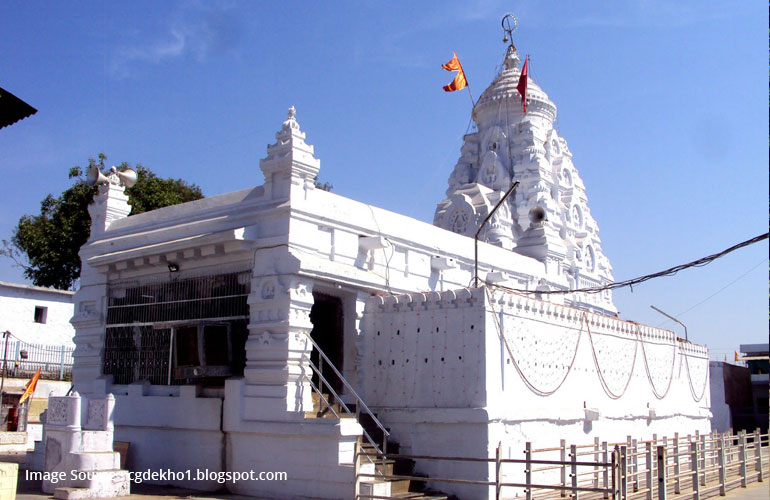 Rajim, also known as the ‘Prayag of Chhattisgarh’, is located at the confluence (triveni sangam) of the Mahanadi, Pairi and Sondur rivers. Rajim is famous for a group of temples dedicated to Vishnu, most important being the Rajiv Lochan (lotus-eyed) and the other, Kuleshwar that stands on an island on the Mahanadi.

Forty-nine Kilometers from Raipur, Rajim in Gariaband district is famous for its rich culture and ancient temples . The temple town holds the Rajim Kumbh every February when thousands of holy men and pilgrims congregate on the triveni sangam for the snaan (royal bath). The festival ends with a spectacular sandhya aarti.

is by far the most revered temple in Rajim. It was probably built by Vilasatunga of the Nala dynasty, who succeeded Mahashivagupta Balarjuna, the Somavamsi king of Koshala. This is evident from two inscriptions found in the mandapa. One of these is an undated inscription of Vilasatunga, the Nala king, which refers to the construction of a Vishnu temple that scholars surmise refers to this temple. The other inscription is of Jagatpaldeva, a Kalachuri feudatory.

Archaeologist MG Dikshit, of the Archaeological Survey of India who worked at the site, is of the opinion that the temple was renovated and rebuilt a number of times. Parts of it like the sculptured pillars and pilasters of the mandapa, two ornate doorways to the mandapa besides the prakara (enclosure) walls and the western gateway are all later additions. This temple has a sculpture of the Buddha in the bhumisparsha posture brought here in the past from an unspecified location. Interestingly, the locals worship this image as Raja Jagatpal.

The original temple, dated to 600 AD only the triratha sanctum with a shikhara the vestibule. The plan of the temple is and west-east of the well-developed panchayatana type with the main temple built on a high plinth, surrounded by four subsidiary shrines which are placed in the four corners in west-east position. The mandapa consists of two rows of pillars along with a similar number of parallel pilasters on the side walls. Between the mandapa and the garbhagriha, there is a narrow antarala with a pradakshinapatha around it. The, architrave on the doorway contains images of Gaja-Lakshmi, Shiva and Vishnu. The temple is dedicated to the four-armed Vishnu with the club, discus, conch-shell and lotus held in his four hands.

‘With the exception of Rajiv Lochan Temple which has a triratha sanctum with a shikhara ir straight-edged pyramidal form, other shrines in Maha Koshala have a pancharatha sanctum with a heavy shouldered rekha-shikhara (curvilinear spire), embellished with large gavaksha-arches on the body an bone bold amalakas at the corners. The doorframe is one-built and lavishly decorated, the later temples are often dominated by large serpents or the river goddesses on the jambs’ (Krishna Deva, Temples of India).

Located opposite the western entrance of the Rajiv Lochan Temple, Rajeshwar Temple is dedicated to Lord Shiva. The temple structure rests on a jagati or plinth, and comprises a sanctum, antarala, mandapa and garbhagriha. The mandapa is supported by a row of pillars and another row of pilasters on either side.

is situated at the extreme end of a spur of land junction of the two rivers. The temp consists of a long rectangular axis wi, steps and a mandapa, has its sanctum east. This narrow mandapa is support, pillars, arranged in two lines of four The shikhara is pyramidal, composed of horizontal tiers which terminate at the (neck) below the amalaka.

was built during the later Kalachuri period. The temple, facing east, is built on a high plinth, comprising of nandimandapa, sabhamandapa, antarala and garbhagriha. The pyramidal shikhara, capped by an amalaka, combines the Dravida and the Nagara styles.