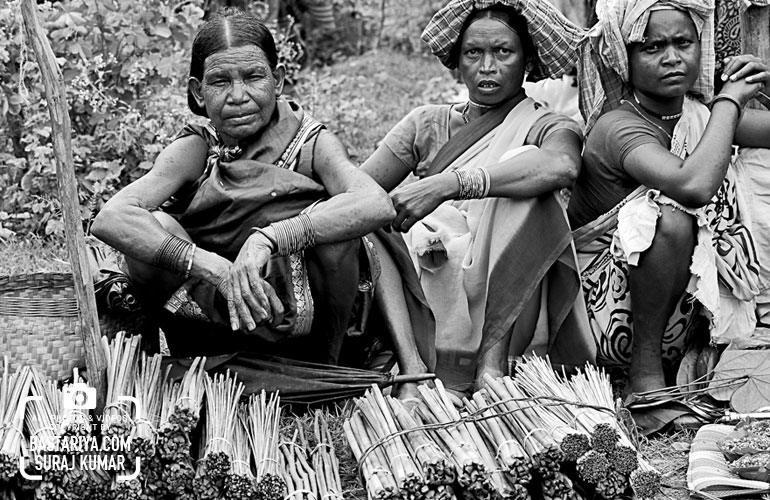 The Bastar tribals are predominantly animistic. They are also influenced by Hinduism and Hindu practices. Their belief varies from tribe to tribe. they worship a pantheon of deities, to which they make regular offerings of terracotta and brass objects. Their shrines can be seen in various locations, such as river bank, a cave or mud shelter. The chief deity is maa danteswari, a local Avatar of Durga, who is taken for worship, in a big chariot drawn by the tribal folk in Dussehra.

The tribals in Bastar believes in ghosts and spirits, the phenomenon of possession, animal worship, tree worship, belief in Rain God, the Hill God and the earth spirit. people are superstitious and black magicians are well respected. In Dhurwa tribe, for example, they call a spirit of rain or river water to bless them with good catches of fish and good crops.

They live in fear of spirit Rau, who marks his victims by shooting small, painful stone or clay pieces at their backs. only, a medicine man(magician) can extract small pieces of stone, which remains invisible to human eye. If not removed, this can lead to death.

People from the Gonda tribe are traditionally forest dwellers. Trees from the focal point of their life/environment. They believe that the trees are hard a work during the day, by providing shade, shelter, and nourishment for all. In the bight, the spirits of the trees reveal themselves.

The Mother Goddess is very important as are clan Gods and local village Gods. The area abounds in female deities, called Matas and worshipped by village people.

Ther are various tribal deites, whom they invoke to provide relief from disease, natural calamities, good harvest and forest produce.

Some of the tribes believe in the transmigration of souls from one body to another after death. Some believe that a person may be transmigrated into the body of any animal or a human depending upon his good or evil work.

Some tribes believe that there are three words. The earth is considered the middle world inhabited by the human and supernatural beings.

The sky or upper world is thought to be the home of the Supreme Spirit or God. He is not represented by any symbol and is believed to be the creator.

The third is underworld, the place of dead.